Here is a link to a preset template for Pacer which is designed to work with Mainstage:

The sysex data will be loaded as the ‘Current’ preset. You can then save the settings to any of Pacer’s preset slots. If you don’t save the preset, the settings will be lost the next time you select a different user preset.

Once you have saved that preset, Pacer’s controls will be configured as shown below:

Pacer’s Expression and Footswitch inputs can also be assigned.

With this setup, you can select Next/Previous patches with Stomp Switches [C] and [D] respectively. As you navigate patches, you will see the LED feedback for Stomp Switches [1]-[6] update according to the state of the assigned parameters in the selected patch.

If you would like to configure your own Pacer preset for MainStage, you will find some tips below.

Program Change
If you would like to be able to select specific patches in a concert, rather than selecting Next/Previous patches one-by-one, you can do so by configuring the Stomp Switches to transmit Program Change messages. It’s recommended to use Presets A1-A4 as templates for this type of application. You can find more information about making custom Program Change assignments on this page: Creating and Customizing Presets for Pacer

MIDI Feedback
It’s possible to let MainStage send MIDI feedback to Pacer, to control the Stomp Switch LEDs. This way Pacer’s LEDs will respond to parameter changes, whether controlled from Pacer or from MainStage’s GUI.

First you will need to enable MIDI feedback for the Stomp Switches:

Once you have enabled MIDI feedback for the Stomp Switch, assign it to a Smart Button or any other parameter in Mainstage. With that done, make sure that the Assignment is configured as shown in Image 1.

With that done, the Stomp Switch LEDs will only change states in response to MIDI feedback. After making those changes described above to Preset D3, you should save the preset. 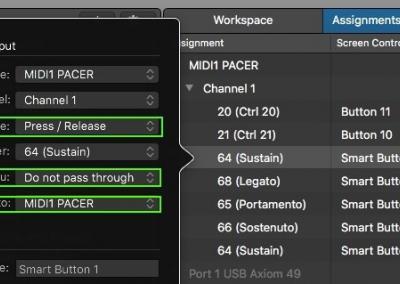 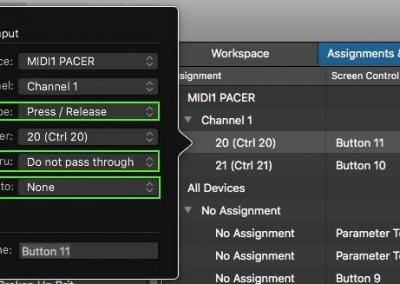