If you find that the controller is listed in your DAW/music application but you cannot hear sound when you play the keys or you don’t see parameters move when you adjust the controls, there may be a communication issue.

If you find that is the case, there are tools available for OS X and Windows which can help you diagnose the problem. 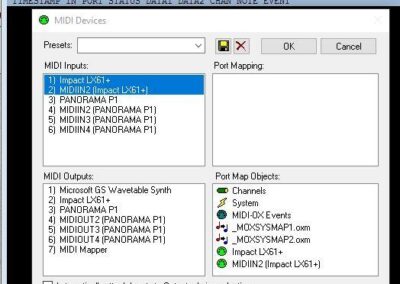 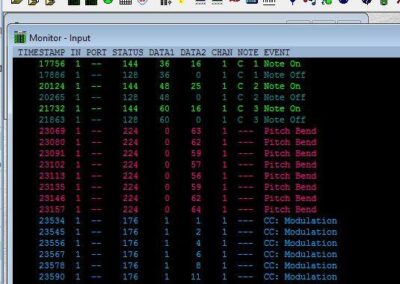 Audio MIDI Setup
There is a utility called Audio MIDI Setup (AMS) built into OS X. This utility has a basic test tool which can detect some types of incoming MIDI messages.

When you release the key, you will hear a small noise which indicates that a Note Off message has been received. You will also see an arrow flash blue, under the port which the Note Data was transmitted on. Note: If you are using a controller which doesn’t have keys, follow the instructions for using MIDI Monitor, below. 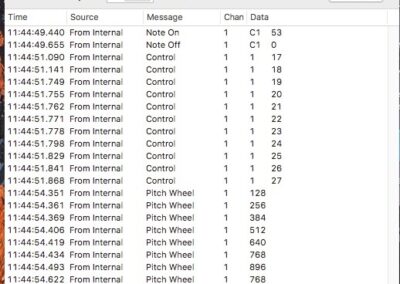 Often music applications will have a MIDI activity indicator which will move or light up when incoming MIDI data is received. If you don’t see anything like that, check that the MIDI settings in the application are configured correctly. See the Setup and Troubleshooting pages for the DAW and controller series which you are using, for details about configuration.

In Windows only one application can access a devices MIDI ports at a time. This is the cause of most of the MIDI communications issues which we encounter in Windows. Most of the time, this kind of problem is caused by having two music applications open at the same time. In those cases, you can simply close your music applications, and open the one which you would like to use with your Nektar controller first.

However, there are some applications which run in the back ground or are not obviously compatible with MIDI devices, so it’s not as easy to tell that there is a problem. For example, the control panel software for some Audio interfaces can be controlled via MIDI, so they can grab MIDI ports as your computer begins to start up. Also, Google Chrome has MIDI extensions, so it is recommended to make sure that Chrome is not running when you try to start your music applications.