‘PB’ stands for Performance Button. When you first take the Panorama out of the box and fire it up, buttons PB1 and PB2 are assigned to Transpose – and Transpose +, respectively. But there are some very useful alternate functions available for these buttons that you may want to explore.

First, to access the PB Assign page, press PB1 and PB2 at the same time. This will bring up a page that looks like Image 1.

Control Functions
The two large dots on the left side of the display show you what the current assignments are for PB1 and PB2. The one that is lit red is the one that is currently selected for editing, and the red text on the right side of the display shows you the current function for the selected button. In the picture above we can see that PB1 is selected, and its current assignment is Transpose -.

PB2 is not selected, so it is in white. But the text underneath the icon for PB2 tells you that it is currently assigned to Transpose +.

If you want to change the assigned function of one of the Performance buttons (PB), simply press it  to select it. Then choose the desired function using Menu buttons 1 or 2 (the Down/Up arrows).

Here’s a description of each of the control functions in the left column. Either button can be assigned to any of the following:

MIDI FX
The main thing to know about the MIDI FX is that using them involves two controls at the same time: you press and hold the selected Performance button (PB) and move another control such as the Mod wheel, a fader or an encoder. Then what the MIDI FX do is alter the order in which the MIDI data is transmitted by the control being moved.

Without the PB held down, controls transmit data in a linear fashion: from 0-127 and back down again. But with the PB held down while the control is moved, the full range of data is still available, but it will be sent in broken groups: for example, 0-12, then backward from 24-13, then forward from 25 to 37, etc., or some other arrangement of the data.

As you can see, this introduces an element of unpredictability, and it can be a lot fun when applied to filter frequency, say, or an LFO rate, or any parameter that can be controlled. So when you’re ready for something completely different, try them out! Because of their non-linear approach they may well be just the missing element that was needed to spice up a performance.

Here’s the list of MIDI FX. Some of these would be too complex to describe, so the best thing to do is give them a try! We think you’ll find them useful: 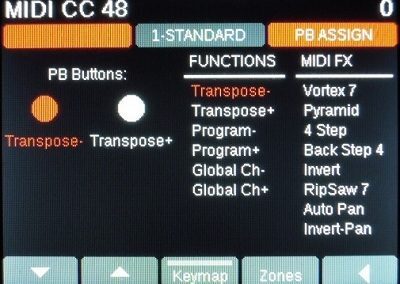