Note: QWERTY Macro functions are only supported in Windows and MacOS 10.10.5 and earlier.

QWERTY Macros are not supported in MacOS 10.11 or higher.

What is a QWERTY Macro? You may not be familiar with that term. But take a look at your computer keyboard: the top row of letters start with the letter ‘Q’, followed by a ‘W’, an ‘E’, etc.. Follow the pattern and you’ll come up with ‘QWERTY’.

Let’s take the concept a step further: a QWERTY function is something you can do inside a DAW by typing a keyboard shortcut on your computer keyboard. For example: ‘CTRL + Z’ is a popular one (‘CMD + Z’ on a Mac); you’ll recognize that as the standard ‘UNDO’ keyboard command, and it can be triggered by a Panorama control. [**]

So think about it: Almost any keystroke combination recognized by your DAW can be programmed into one of Panorama’s QWERTY Macros. What’s more, the Macro Editor we’ve provided allows you to chain together up to eight sets of keyboard commands. This means it’s possible to construct some fairly complex commands and launch them with a single press of a Panorama button. Or it can be as simple as making a button ‘be’ the space bar on your computer keyboard.

How to create or load a Macro

Before we get into how to set up a Macro, there are some important points to cover:

You’ll be amazed how easy this process is.

We’ll be using the Fader page for the following example, so move one of the faders found on the left of the display so we’re on the same page. You will want to have your DAW open with a new project so you can see how this works at each step of the way.

What we’re going to do is assign Fader button 1 to save the new project within your DAW [**]. So press Fader button 1 and you’ll see the following information in the display: (Image 1).

A red circle appears in the Panorama display when a fader button is pressed; that’s how you’ll know which one is selected for editing. You can see that in the picture above. We’ve also circled the graphic above Menu button 3 (M3), which sports an icon resembling a computer keyboard. Press this button and the assignment for Fader button 1 will change automatically to look like this: (Image 2).

Now take a look at your computer screen: you’ll see the main window for the Macro Editor we mentioned earlier. It’ll look like this: (Image 3).

Let’s take a quick tour of the Macro Editor window: 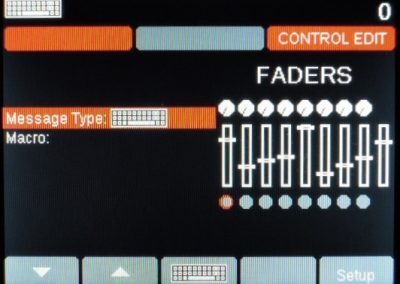 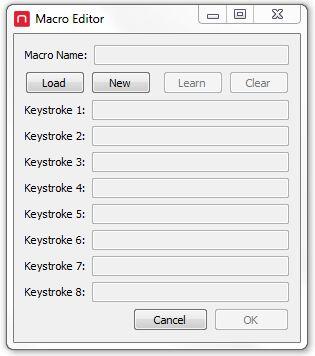 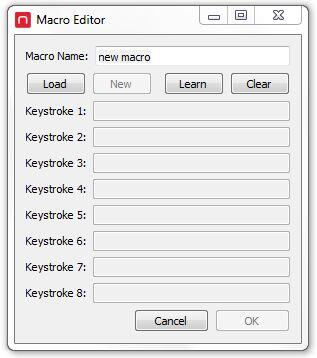 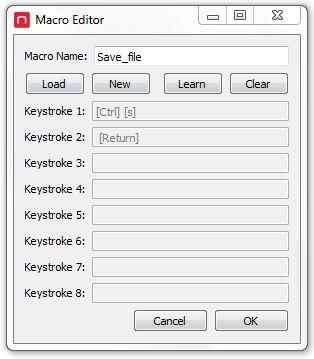 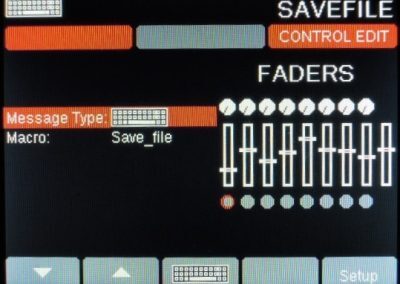 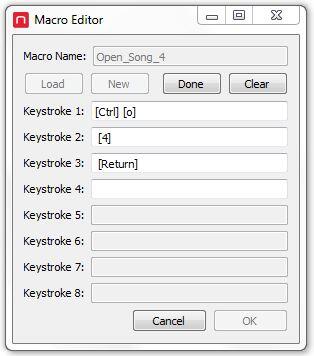 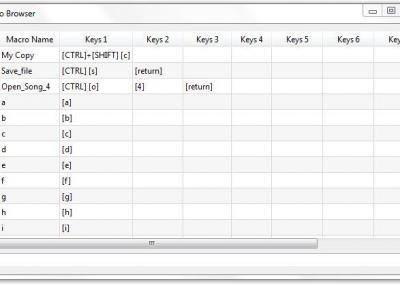 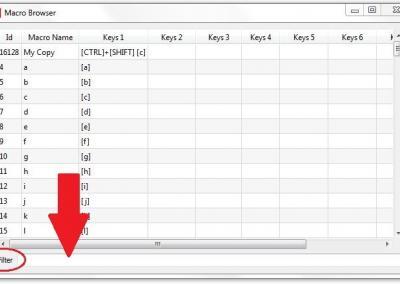 Click the ‘New’ button in the Macro Editor window and immediately a couple of things happen:

We’ll give the new macro a name of Save_file. Now click the ‘Learn’ button. When you do, two new things happen:

Now here’s a fact we haven’t mentioned directly yet: each Keystroke line can actually hold up to three keystrokes, which allows combination keystrokes to be recorded. This is actually what you do on your computer keyboard without even thinking about it sometimes: we’ve all held Control and pressed C, or V, or some other combination to tell the computer to copy or paste, or whatever. The Macro Editor will allow three ‘simultaneous’ keypresses to be considered a single instruction, so a more complex command like ‘Save As…’ can be executed as well (‘Control’ + ‘Shift’ + ‘S’).

So on with the show, here:

There are a few things you’ll want to remember at this point:

Let’s say you’ve already constructed a Macro like this: (Image 7).

This series of commands is designed to do the following:

What you want to do now is assign that Macro to F-Key 4. So here’s how to go about that:

By the way, you may want to click ‘Load’ sometime and scroll through the list of preset Macros we’ve included so you can see what’s available already. No sense ‘reinventing the wheel’, as it were.

Filter options in the Browser
When you click ‘Load’ in the Macro Editor window the Macro Browser opens, showing you the complete list of QWERTY Macros at your disposal.

But if you’ve made a bunch of them yourself it could take a while to scroll through the entire list to find the one you want. There’s a way to simplify the search process: use the Macro Browser’s Filter feature. (Image 10).

Use the Filter line to type in part or all of the name of the QWERTY Macro you want to use. For example, you could type in ‘aud’ and the Filter will display only Macros with names containing those letters: Audio, Audition, Audio In, New Audio, etc.

[*] If you own Reason as well as another DAW, you can use them both at the same time. That’s a topic for a different article, though! So if you’d like to know more about that, read the article titled ‘Using Panorama with Rewire’. That will tell you how to link the two DAWs. There’s also an article specifically aimed at using Panorama’s QWERTY features with Reason and Windows (QWERTY Macros: Quick-select of Favorites in Reason (Windows)).

[**] That was just a simple example; ‘Undo’ and ‘Save’ probably already have been pre-assigned to an F-Key for you. Check the F-Keys Map for your DAW inside Panorama to see what’s already there.

How to change or delete Macros

You can save over 8000 of these things, so it’s not like you’re going to run out. But the list could become unwieldy if you have accidentally saved some QWERTY Macros that you didn’t really need while you were learning to create them. And a simple slip of the wrist can result in an incomplete Macro, or one with an accidental keystroke. So here’s how to go about eliminating the QWERTY Macros you don’t want.

The QWERTY Macros you have constructed are located inside a file called ‘p4.user.cfg’, which can be found here:

Chances are pretty high that your computer won’t know what application to use to open the Panorama’s .cfg (config) file. So after you open the file, tell your computer to use a text editor such as WordPad (Windows) or TextEdit (OS X) to read it.

The next thing to do is search for a QWERTY Macro by the name of ‘Save_file’ or ‘Open_Song_4’. (We created those in the article ‘QWERTY Macros: Shortcuts triggered by Panorama controls’.) Once you’ve located ‘Save_file’, for example, here is what you’ll see: (Image 11).

In order to delete this particular QWERTY Macro, select everything shown in blue below and delete it. But be careful not to delete anything more or less than exactly what is shown or you may disrupt another QWERTY Macro you have created. (Image 12)

Note: the changes you make will not take effect until after the computer has been restarted [*].

Editing the contents of a QWERTY Macro

First, find the file ‘p4.user.cfg’ at the location listed above for your OS and open it.

Second, search for the name of the QWERTY Macro (‘Open_Song_4’ in this case). Here’s what that one looks like: (Image 13).

We’ve circled the data you will need to edit in order to change this QWERTY Macro. Change the ‘4’ to a ‘5’ in each case as shown below, and then save the Config file. Be sure not to change the name of the file; just save it on top of itself. (Image 14)

Note: the changes you make will not take effect until after the computer has been restarted [*].

[*] Depending on your platform, it may be necessary to shut the computer down before the changes will take effect, not just restart it.

Why won’t the Macro Editor open when I press the QWERTY button?
If you’re asking this question, you’re probably connecting the Panorama to a Macintosh computer.

There’s a simple explanation: In order for the Macro Editor utility to open on a Mac, the computer’s MIDI server must be running. So if you haven’t started Reason or some other DAW, the Macro Editor won’t open.

Alternately, you can open Audio MIDI Setup or some other utility such as MIDI Monitor.

Why don’t my custom Macros work on other computers?
The fact that a QWERTY Macro has been assigned to a control is stored with the Panorama Presets and Maps, but the Macros themselves aren’t stored inside the Panorama. They’re stored on a list inside your computer.

So if you would like to use custom Macros on a computer other than the one they were created on you will have to transfer your p4.user.cfg file.

In Windows this file is located here: C:\Users\(your-user-name)\AppData\Roaming\nektar\Settings

In OS X this file is located here: (your-user-name)\Library\Application Support\Nektar\Settings