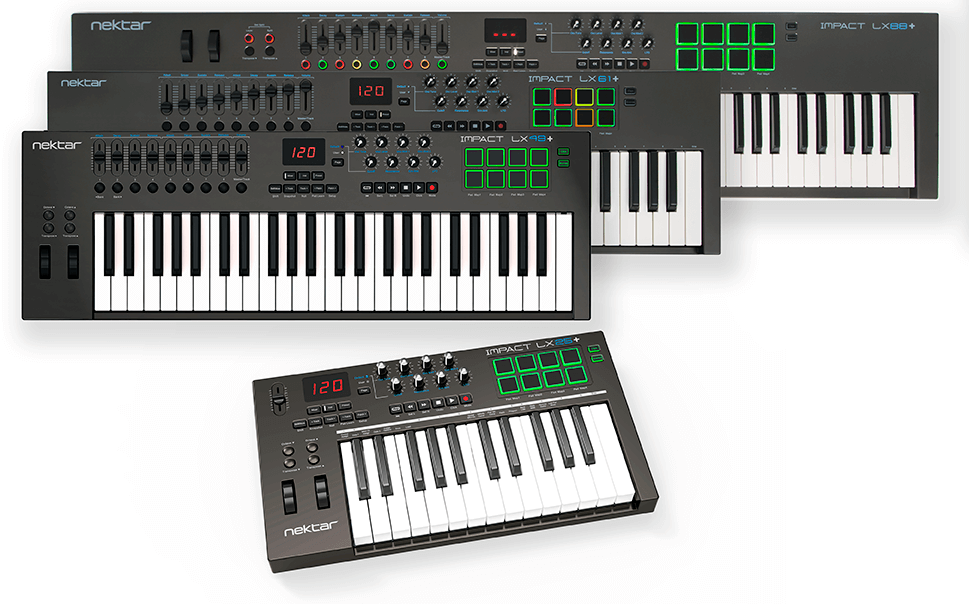 IMPACT LX+ CONTROLLER KEYBOARD
The 49 or 61 note velocity sensitive keyboard features a synth action keyed with medium tension. The full-size, piano-style keys are covered to protect against dirt and dust while also complementing the Impact LX design. With 4 velocity curves gradually increasing in dynamics, there is choice for any playing style.

CONTROL CENTER
Nine 30mm faders, 9 MIDI buttons and 8 encoders are at the center of Impact LX49’s and 61’s control panel. Used with Nektar DAW integration, the controls take on a life of their own, providing flexible pre-mapped DAW control giving you the best of both worlds.

ILLUMINATED, LIGHT TOUCH PADS
Calibrated to trigger at a light touch, finger drumming is well within reach, with a nice and even velocity response. Each pad can be assigned any MIDI note number or MIDI cc message, for use as MIDI trigger or toggle buttons. But the best part is “Pad Learn” that allows for easy note assignment by simply selecting a pad, playing the note or wanted drum sound on the keyboard – and the assignment is done. Its 4 color LED illumination not only looks good, but also indicates which pad map is currently loaded and can even tell which type of MIDI message each pad sends. With Nektar DAW Integration, the pads are automatically assigned to, for example, Reason and Bitwig. The two Clips and Scenes buttons are used in Bitwig  to trigger… well … Clips and Scenes. In Reason, a clever control of Reason’s location points creates a similar experience with scenes triggering of any song.

CONNECTIVITY – Win, Mac and iOS
As a low powered USB device, Impact LX+ works with all USB devices that feature a Class Compliant MIDI driver. That includes all version of Windows from XP and higher, Apple OS X 10.5 and higher plus Linux (as long as a USB MIDI driver package is installed). Impact LX+ keyboards also connect to an Apple iPad using the iPad’s optional USB camera connection kit (optional). Of course the Impact LX is powered by the iPad, so you can work away for as long as your iPad remains charged.

BITWIG 8-TRACK included
With the included Bitwig 8-Track, the dedicated Clips and Scenes buttons switch the pads to instant control of clips or scenes with LED feedback showing which clip or scene is currently playing, which ones contain playable material, and if recording has been activated.   Both Impact LX49+ and LX61+ are shipping during the last week of July from all major resellers worldwide.

The links below take you to our support site at support.nektartech.com

We use cookies to ensure that we give you the best experience on our website. If you continue to use this site we will assume that you are happy with it.OkPrivacy policy