Here are the steps you need to follow to get Cubase up and running with your Impact Controller. Impact Steinberg integration is compatible with Cubase 5 and up, as well as Nuendo 6 and up. 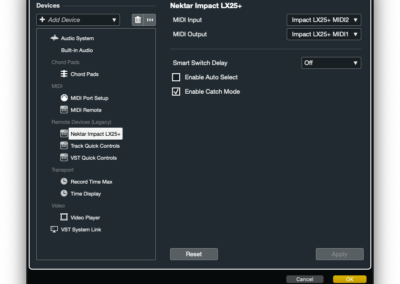 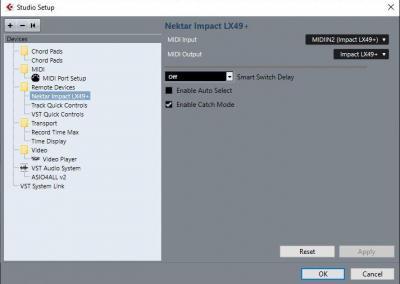 Automatic Track Selection
By default, when you move a control which is associated with a specific track, that track will become selected. If you want to disable this behavior, uncheck the ‘Enable Auto Select’ option as shown in the images 2 and 4.

Fader 9 controls only a small range of the Master Volume
In projects created with Cubase 9.0.30, if you move the 9th fader while holding the button below that fader, you will only be able to control the Master Volume parameter over a small range. This issue was fixed in Cubase 9.5 but the issue will still occur when you open a project that was made in Cubase 9.0.30. Projects made in newer versions of Cubase will not exhibit this problem.

Patch Changes
If you find that the [< Patch] and [Patch >] buttons don’t work when controlling a third-party plug-in, it’s likely because the plug-in uses it’s own patch browser. The Patch buttons on the Impact series control the patch navigation functions of the DAW, so you may need to save the plug-ins presets in your DAWs patch format, before you can use the Patch buttons on the Impact controller for patch navigation. You can find more information about saving patches in your DAW, in the documentation for that program. 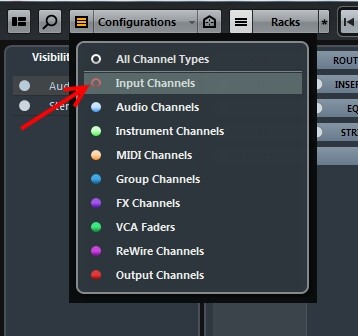 Track select issues with Impact in Cubase 8 and above
In Cubase 8 and above, Input channels can be controlled from Impact’s Mixer Mode, where they could not be controlled in earlier versions of Cubase. This can result in unpredictable track selection when using the [< Track] and [Track >] functions. To fix this problem, simply hide Input channels in the MixConsole as shown in the image to the right.